Martha: Does this count as a holodeck episode?

Cindee: Not to me. The holodeck is involved, but it’s not the plot.

Martha: I disliked Riker this episode, honestly I didnt enjoy this episode all that much…

Cindee: I didn’t say you would!

Martha: Although i would like a “personal relaxation light” if you know what I mean…. seriously, what does it mean?

Cindee: That is usually true

Martha: When they get to the big space station thats what Picard says he wants to do, put on his personal relaxation light and read a novel.

Martha: Worf and Yar are off playing ‘parrises squares’. I imagine many people are dead as Worf is taking it very seriously.

Cindee: Yeah why does Riker wander about the ship and see all the supporting characters before the main action? Perhaps so the actors don’t feel left out.

Martha: Hahahah! Yes Riker absolutely does go on a random wander just to check everyone has a job. Data is painting. Crusher is solving a disease. Troi doesn’t fucking exist.

Cindee: Yeah Data is always making paintings, I’m not sure what is up with that.

Martha: So Riker can make ‘hilarious’ quips about the blind man teaching the android to paint!

Cindee: Oh wow that’s nice and ableist. As for parrises squares, they always talk about it but never explain how it is played. Like they talk about it in all three series. Apparently it is really dangerous, though. Anyway my ride is here, I have to go…

*interlude of solace and despair whilst Martha contemplates why she is doing this, and if Cindee will ever return*

Cindee: Where were we…

Martha: Okay! Let me get my notes!

Martha: I take notes every episode. Otherwise I forget the good quotes SUCH AS ‘What’s a knockout like you doing in a computer generated gin bar like this?’

Cindee: What are you talking about, that’s a great pickup line. That’s how my husband and I met. He said that to me.

Martha: I hope he was leaning against something at the time

Cindee: Well, like Riker, he is a tall man.

Martha: Do we find it creepy that Riker had the holodeck rustle up his perfect physical woman?

Cindee: I find it creepy whenever a character has some sort of romance with a holodeck character

Martha: And then Picard walks in! It’s the equivalent of walking in on someone with a sex doll… but its totally normal! Yeah it’s super creepy especially as she knows exactly what she is too (unlike, I assume, the other holodeck characters?)

Cindee: Yeah most don’t, usually when they figure it out, we’ve got a damn holodeck episode on our hands.

Martha: Also I can really do without Riker playing the trombone. This is why it felt like a holodeck episode to me as it was fully of stupid holodeck stuff alongside the real world plot.

CIndee: Well. I’ve got some REALLY bad news for you. It’s one of his main character traits. There’s this one episode where Crusher is describing everyone, and that’s like the first thing she says about him. 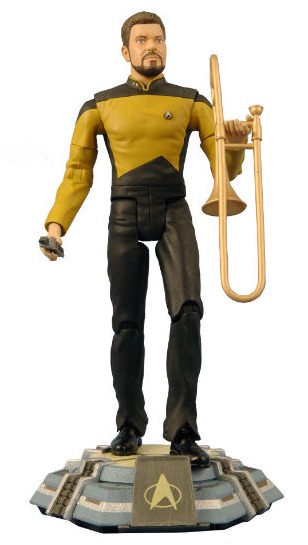 Martha: Seriously?! The TROMBONE urgh. Okay I’m out Cindee. I WAS PROMISED SPACE ADVENTURE. BOLDY GOING WHERE NO MAN HAS GONE BEFORE. Not fucking trombones!!!

Cindee: Do you have something against trombones in particular, characters have to have personality traits for Crusher to explain in that episode.

Martha: Riker has this slightly creepy smiley eye thing, and whilst blowing a trombone his sexy eyes at the lady was just… I can’t!

Cindee: I keep telling you Martha, that’s how my husband and I met. STOP JUDGING US

Martha: So, potentially one of the worst almost disasters to happen to the ship so far, and where is Picard and his number one? ARSING ABOUT ON THE HOLODECK

Martha: Typical. Like they’re upgrading the ship, they should not be on the ship, I don’t care if Riker is testing out the ‘upgrades’ get off the damn Enterprise!

Cindee: Well the bynars had it covered

Martha: I didnt mind that bit. They were okay. I don’t quite understand how Picard and Riker managed to download the planet back to the planet merely by looking at it, but that’s the least of my worries…

Martha: Yeah they made sense overall. Plus they had snazzy information bum bags And who doesn’t love a bum bag?

Cindee: Is that a Britishism? Bum bag?

Martha: Hahaha yes. You call it a fanny pack. But a fanny is a vagina here. So we don’t call it that.

Cindee: oh wow. ok. This information will come in handy when I next visit England.

Martha: Hahah. Yes So yes we don’t mind the Bynars. I hope they don’t get in too much trouble from evil twin Picard.

Martha: Yeah, the other bald captain who is like Picard’s evil twin because he has a beard. He also has a fancy name but I didn’t write it in my notes

Martha: I am not I haven’t even seen it haha

Cindee: Where did you see this evil Picard?

Cndee: Welp. I forgot about THAT. Fun fact: as established by the mirror universe Spock, in Star Trek, goatee = EVIL

Cindee: Right that’s why at first I was like “is she thinking of TOS or what?” What is the point of that guy?

Martha: He’s just there to like, tell them a bit about the Bynars, and also tell Data and Yar there are no more ships to go help the Enterprise.

Cindee: No, he has a full board, not a goatee

Cindee: Right, cause they just want to borrow the ship to download their computer files. The Enterprise is thus a flying flash drive

Martha: It’s the only half decent ship in the galaxy. Despite them having problems with the holodeck…. you don’t say Picard!! I continue to like Data. He was good this episode, evacuated everyone, felt super guilty about everything. I like him

Cindee: Well they aren’t downloading their planet into the holodeck

Martha: Because the holodeck is simply a sexy distraction!

Cindee: No, its a death trap

Martha: Why don’t they just board it up after like, the second death. And be like just watch a fucking movie okay?!

Cindee: They keep using them and things keep going wrong all the way through Voyager, Seriously, someone get on those safety protocols or the Russians are going to hack them so easily.

Martha: So yeah, I wish they had concentrated more on the Bynars. Perhaps more info about them and their planet and the space station they docked at. And none of this sexy holodeck jazz brotherly nonsense

Cindee: Yes, you probably frequently talk about brothels, so this will be a serious problem in the future… Anyway at the end, doesn’t Riker go back to the holodeck and now she’s no good?

Martha:  Hahaha oh god yeah! Like I don’t get that, was Minuet like temporary? Why? How would that be a thing? And he tried ALL THE WOMEN but none were the same haha.

Cindee: I think the implication was that the Bynars had magically make the holodeck better, and now that they were gone it wasn’t again, which, why they’d take that away, I dunno.

Martha: Maybe because Riker was grossing them out. If I was Minuet I’d hot foot it out of the holodeck. Yeah like so she was a response to what he wanted whereas the holodeck normally just had pre programmed ‘characters’

Cindee: So, the holodeck read his damn mind?

Martha: Well he does say at some point she was saying exactly what he wanted her too. And Picard was saying how well she responded to… input. Poor Troi. No wonder she wasn’t in this episode!

Cindee: I sometimes wonder where Troi is when it would be handy for someone to be able to read people’s emotions… oh yeah doesn’t she talk in French to him?

Martha: Hahah yes she talks French to Picard…And Rikers all ‘hands off!!’ Haha

Cindee: Does HE say anything in french to indicate he is French, otherwise, why not just talk in a British accent.

Martha: No, she starts it from his name when he is introduced

Martha: But the holodeck isn’t healthy. No one will ever live up to Rikers perfect woman he created.

Cindee: I dunno, he seems to find other women to love