An early story meeting about this episode was attended by Patrick Barry, Gene Roddenberry, and Herbert J. Wright. Wright was wary that the concept of a matriarchal society had been too overdone. “So one of the major issues that we didn’t want to do was an Amazon Women kind of thing where the women are six feet tall with steel D cups,” he recalled. “I said, ‘The hit I want to take on this is apartheid, so that the men are treated as though they are blacks of South Africa. Make it political. Sexual overtones, yes, but political.’ Well, that didn’t last very long. Everything that Gene got involved with had to have sex in it. It’s so perverse that it’s hard to believe. The places it was dragged into is absurd. We were talking about how women would react, and Gene was voicing all the right words again, saying, ‘Oh, yes, we’ve got to make sure that women are represented fairly, because, after all, women are probably the superior sex anyway, and it’s real important we don’t get letters from feminists, because we want to be fair and we don’t want to infer that women have to rule by force if they do rule, because men don’t have to rule by force.’ Very sensible stuff. All of a sudden something kicks in and he changes: ‘However, we also don’t want to infer that it would be a better society if women ruled.'” His voice becoming increasingly louder, Roddenberry continued that this was because women were untrustworthy, “vicious creatures,” which he angrily blurted out in a torrent of hateful verbiage. Concluded Wright, “Then he looks out the window, looks at the outline, and says, ‘Okay, on page eight…’ and continues like that didn’t even happen.” (The Fifty-Year Mission: The Next 25 Years, p. 83)

Martha: Jesus this man is insane!

Martha: But yes he failed in literally all of his supposed aims. I mean failed and then doubled down on the fail

Cindee: It’s sad. there are later episodes where they kinda invert things and then make a point about the actual injustice in our culture and do it well. But NOT THIS TIME

Martha: No this was just ridiculous. The way the men were portrayed as very typically feminine and sexualized. As if that’s the only way one sex can be the ‘lower’

Cindee: It’s so ridiculous too because they’re ALWAYS encountering patriarchal societies and judging them but then being like whatevs. But here they’re like noooooo, this is sooooo wroooooong. And my husband was saying that the women on this planet are unusually strong and that’s why they’re in charge?

Cindee: White people oppress black people, but not because white people are stronger.

Martha: Exactly. And all this ‘let’s not make them Amazonian, let’s just choose shorter men!’

Cindee: And then they’re like “Riker is so tall”?

Martha: If anything I thought Riker came out of this looking… okay?

Cindee: What did Riker do that was so okay?

Martha: He was asked to wear the outfit to meet the mistress. And he did, and he wasn’t a giggling dumbass about it like Troi and Yar. (Yes he then had sex with the lady but… )

Cindee: Well of course he did

Martha: But isn’t the whole point about respecting the cultures they come across. There was a lot of prime directive blathering. It seems the prime directive doesn’t ACTUALLY matter if someone is at risk of death

Cindee: Even though it did in Justice?

Cindee: Well, that was Wesley, the golden child

Martha: It’s literally ‘Prime Directive unless something is happening that we wouldn’t do. So…. what’s the point!

Cindee: pretty much. Like I said, it gets more consistent, though I think it is on the whole dumb. I mean, ok, spoilers:  There are times when a civilization is literally going to get DESTROYED. Like, WIPED OUT. And they’re like “Sorry! Can’t save you! PRIME DIRECTIVE!!!!”

Martha: BUT FOUR GUYS?! Well they didn’t even bother to cast four guys they cast one and the others were just implied guys

Matha: So in the end Riker does an impassioned speech so they let this guy(s) stay on another species planet where they don’t want them. Success for the Prime Directive! Meanwhile Crusher is furious to realise she didn’t cure the common cold after all

Martha: Is it implied that the cold came from the holodeck?! Like is the holodeck trying to kill them again?!

Cindee: Oh I forgot that? I was so busy with the damn sexism I forgot about the B plot. That sounds about right, murderous holodeck

Martha: Ok, so here is Wesley and pals off to go play in the snow 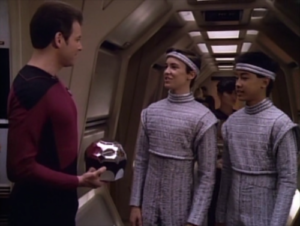 Martha: They throw a snowball which hits Picard and Worf, who comment on an unusual smell. And him and Worf are the first two after Wesley and other boy to get the cold

Cindee: Oh is this the one where the snowball somehow doesn’t dematerialize off the holodeck?

Martha:  YES! I didn’t know if that was allowed cos those guys sorta walked off it before briefly

Cindee: So, it’s an infected snowball

Martha: Well it never ever mentioned the holodeck or the snow. They just say it’s airborne through smell. Just implied?

Martha: I must carry on, the prime directive…

Cindee: Also . . .  what if someone else says sense OARS and you miss it?

Martha: They almost certainly will

Cindee: All in all, I think I’m going to have rethink my ratings once we’re done with season 2. I stand by my higher ratings, but the lower ones need some reconsideration

Martha: I saw someone considered angel one the 4th worst