Cindee: So, Q is back

Martha: As a three headed snake bubble. Which is just great!

Cindee: Well, Q can appear as anything.

Martha: As we are made painfully aware of throughout.

Martha: So, Q has taken a bit of a shine to Riker, (Let’s face it, who hasn’t), and is going to test him as some sort of elaborate plan not unlike the confusing elaborate plan of the pilot.

Cindee: That about sums it up

Martha: Spoilers – I assumed by the end that Q had upset the rest of the Q’s and was going to be, put in Q jail… I find the Q actor a little creepy.

Cindee: In what way?

Martha: I dunno, wide eyes and creepy smile when he’s in his various disguises.

Cindee: That’s quite the bizarre detail to nitpick at

Martha: I will nitpick at anything I can, and you can’t stop me!

Cindee: I wasn’t trying to stop you, I was nitpicking your nitpicking

Martha: So off they go to game island, I was actually looking forward to what they had planned for the game, Q was described multiple times as ‘creative’ so I was genuinely interested. Turns out the ‘game’ is dressed up ‘animal things’ trying to kill them. Not a game. Not a game AT ALL!

Cindee: What did you expect, Wizard Chess?

Martha: I’d have accepted anything that remotely resembled a game. Not Worf running at the ‘animal things’ (they call them animal things about 4 times) them using their fazers to blow up rocks and animal things.

Cindee: Well, to be fair, there was  penalty box

Martha: THERE WAS NO RULES about the penalty box.

Cindee: Sure there was: one person at a time

Cindee: Hahah! So, you expected a character we already know to be fairly erratic and arbitrary not to be?

Martha: I wanted there to be some STORY to the episode. Not just ‘oh you guys are gonna get attacked in this game, then I’ll tell Riker I’ve gave him a power, and then he can save you guys because I’ve told him to, and then, more stuff’

Cindee: I don’t know where these expectations came from! What show have you been watching?

Martha: LMAO. I know, what’s wrong with me!? So, Ive accidentally spoiled myself when looking for a FB photo for the blog as I noticed all the cast photos have everyone BUT Yar, so I imagine she’s not long for this world…

Martha: But today in ‘who does Yar fancy this episode?’ the answer is *drumroll* PICARD!!!!

Cindee: What makes you think she is into Picard?

Martha: When she’s in the penalty box, she makes it very clear.

Martha: PICARD: Don’t worry. There’s a new ship’s standing order on the Bridge. When one is in the penalty box, tears are permitted.

TASHA: Captain. Oh, if you weren’t a captain.

Q: Consorting with lower rank females, Captain? Especially ones in penalty boxes? Destructive to discipline, they say. But then again, you’re what? You’re only human? Penalty over.

Martha: And she makes googly eyes when she says it.

Cindee: Maybe it was non-romantic love

Martha: So Worf throws himself at the animal things, isn’t very successful at being a warrior. He then jumps at an exploded rock shouting drop your weapons at Riker, again, not a very succesful warrior.

Martha: Meanwhile Q is on the Enterprise whilst the directors make the most out of the fact that Patrick Stewart did a lot of Shakespeare by making him reads loads of Shakespeare

Martha: I DID NOT!

Martha: Definitely get that free Shakespeare in

Cindee: Yeah, they don’t stop doing that, by the by.

Martha: I’m into it. It’s fine. So, Riker gets Q powers, does some sexy laughing. Saves everyone, has a little chat with Q where Q seems to imply humans will evolve past Q and therefore they want a human to, help them grow?

Cindee: What was sexy about his laughing?

Martha: It’s Riker…. Everything he does is sexy, INCLUDING his sexy ignoring of Picard, his sexy calling him Jean Luc…

Martha: So I think the main amazingness of this episode is Riker granting everyone’s wishes.

Martha: La Forge’s is fairly standard, sight, and obviously he fancies the pants of Yar. Wesley apparently wanted to be 40 years old and still wearing the same jumper. Poor Wesley, he got killed AND rebuffed from the bridge in the same episode.

Cindee: Ok, I’m not an expert on going from being blind to not being blind, but I don’t think that it would be that simple. How would you know what anything you were looking at was?

Martha: Well, I suppose he has had some vision with all his different visor settings, so this is just a new ‘setting’

Martha: Bless Wesley. Everyone’s immediate response to seeing him, even his own mother, is ‘Wesley we’re busy’ ‘Wesley this doesnt concern you’ So, Worf’s greatest wish OBVIOUSLY is a woman he can bang without destroying! However, sex appears to be, fighting??

Cindee: Ok, so there’s a couple things there: first, it is actually fairly well established later on that Worf is not a fan of casual sex

Martha: So, Riker was totally off base thinking he wanted a lady Klingon?

Cindee: Seems that way to me, as for the violence part, yes it is implied that Klingon sex is violent on many occasions.

Martha: In season 3 do they just start again and ignore the first two seasons ‘implications.’

Martha: Riker also states that Worf has ‘no connection to his people’ WHAT ABOUT THE TARG EH

Cindee: Ok, so yeah, Riker is assuming a lot of shit about Worf

Martha: Also, why dont they speak Klingon when she shows up, instead of just, growling?

Cindee: Like, why does he need a connection to “his people”? Why are “his people” even Klingons? He was raised by humans

Martha: Well he has said a few times that he’s a Klingon, like when he wanted to stay with Picard he said he cannot leave his captain as a Klingon, and Picard is all ‘YOU ARE A STAR FLEET OFFICER!!’ Plus Sash!

Cindee: Yes, I agree that Worf is all into being Klingon. I am just arguing that overall that doesn’t make a lot of sense to me

Martha: Does he speak Klingon? That would maybe explain the growling…

Martha: But I would definitely have a traditionally British pet, like a Shetland pony

Martha: And I’d wear a traditional British garment at all times. Like, one of those bearskin hats. AND WHEN I HAD SEX WITH AMERICAN MEN I WOULD DESTROY THEM

Cindee: See, that’s what I’m saying, it makes no sense.

Martha: When was his background established? Because it’s all over the place right now.

Cindee: I feel like the implication is that in general, your genes or whatever have a much bigger impact on your environment, which I’m not on board with. Worf’s background, you learn bits a pieces here and there. He was raised by humans from a very young age. Eventually you’ll meet his parents. They’re walking stereotypes. There’s other details, but SPOILERS. So, that was all the wishes yeah? He wants to make Pinocchio a real boy but Data says no before he does it, yeah? Or actually, they’re not really wishes, they’re Riker’s assumptions of wishes

Martha: Data refuses the real boy yes haha. We don’t get to find out Yar’s wishes because they’re unsuitable for broadcast. Or Picards. Or Dr Crushers… but again, filth

Cindee: We haven’t found out what anyone wishes, just what Riker thinks they wish, and since Riker is very dumb . . .

Martha: That’s true. So yeah Picard calls out Q as a ‘flim flam man’ Riker apologises to Picard for being an idiot and he feels very silly, Picard replies ‘quite right so you should!’

Cindee: Well, Riker is an idiot. I mean, you’ve seen his thinking face

Martha: Hahahah! I like Riker. I don’t want him to get a beard.

Martha: Oh also Riker gets on a chair just fine so clearly that hasn’t started yet. INCONSISTENT

Cindee: Haha, ok, so, Riker’s an idiot, end of episode. 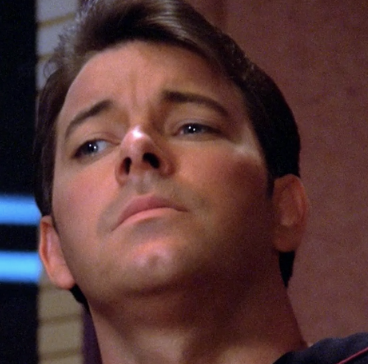