Martha: We have a new chief engineer!

Martha: I’m sure that’s our fourth hahaha. He didn’t die though! But I’m sure we’ll never see him again

Cindee: Ok, so I take it you watched the Arsenal of Freedom.

Martha: I have indeed! Of all the ’21st century Earth was terrible’ i think sadly the ‘peace through superior firepower’ is the most accurate so far

Martha: But unlike humans who sorted themselves out in time to fix it, because humans rock, this planet has wiped itself out.

Martha: Leaving only deadly weapons at every turn

Cindee: And a robot to sell them.

Martha: So Yar decides ‘definitely better get down to that’ What could possibly go wrong. Everything. Everything Yar.

Cindee: Hahaha. So, first things first. I just want to say, for the record: Deanna Troi’s rank is Lt. Commander. She outranks LaForge AND Logan

Martha ‘As the ship counsellor its my job to interrupt you and say ‘the new guys are nervous we are being SHOT AT BY AN INVISIBLE SUPER AWESOME SHOOTING THING’ no shit Troi. I wont hear a thing about chief engineer no4! He is absolutely the 4th best candidate for the job!

Cindee: Maybe, but she outranks him

Martha: Well Logan outranked LaForge right? 2 dots vs a dot and a half

Martha: But, Picard said Geordi was the boss, soooooo. MAIN CAST CINDEE, why do we even care about anyone else?

Cindee: Troi is the main cast, she’s a Lt. Commander

Martha Okay LaForge is trained in command, military AND navigation and engineering

Martha: Troi is good at ‘ooooh I feel that maybe were gonna get shot at’

Cindee: I don’t know that I agree that LaForge is trained in military

Cindee: But it isn’t his job, he just does it on the side

Martha: Honestly i feel the colours are very blurred, you said Geordi is a super good engineer too.

Cindee: yeah they get more clear next season

Martha: Geordi is multifaceted, whereas Troi doesn’t even have a colour

Martha: She gave up her right to be the boss of the ship when she didn’t wear her uniform and 2 and a half pips, plus clearly Picard likes La Forge, he’s left him in charge twice now. PLUS HE UNDERSTANDS HIM NOW. He’s seen through his eyes….

Cindee: lolololol ok, so Picard erroneously leaves LaForge in charge and beams down and falls in a hole with Crusher

Martha: Wooooah wait a minute. Riker meets a guy called Rice(r) and has some fantastic bants

Cindee: about the good ship lollipop

Martha: Like I dont know where ‘yo momma’ jokes started But I’d like to think it was with Riker… Rice is all ‘who sent you’ and Riker replies ‘YOUR MOMMA’

Cindee: I don’t think that those are related…

Martha: (I think he technically says your mother but Im calling it regardless) but yes, the good old Lollipop is indeed a good ship. That was some pretty snazzy alien tech to be fair. Shame they couldn’t actually buy some…

Cindee: Yeah so Yar keeps outsmarting them or whatever

Martha: She fires her fazer and it works ONCE. Data does most of the smartsing

Cindee: Meanwhile, Picard and Crusher fall in a hole

Martha: Why are you so obsessed with this hole! I’m just glad Picard didn’t ‘omg fall on top of the lady’

Cindee: Also, if those things are so fancy, why can’t they fucking aim,
they’re worse than storm troopers!

Martha: And they dont even have that genuine war syndrome thing to blame…

Cindee: Oh and the hole, I just think it is a stupid plot point to fall in a hole 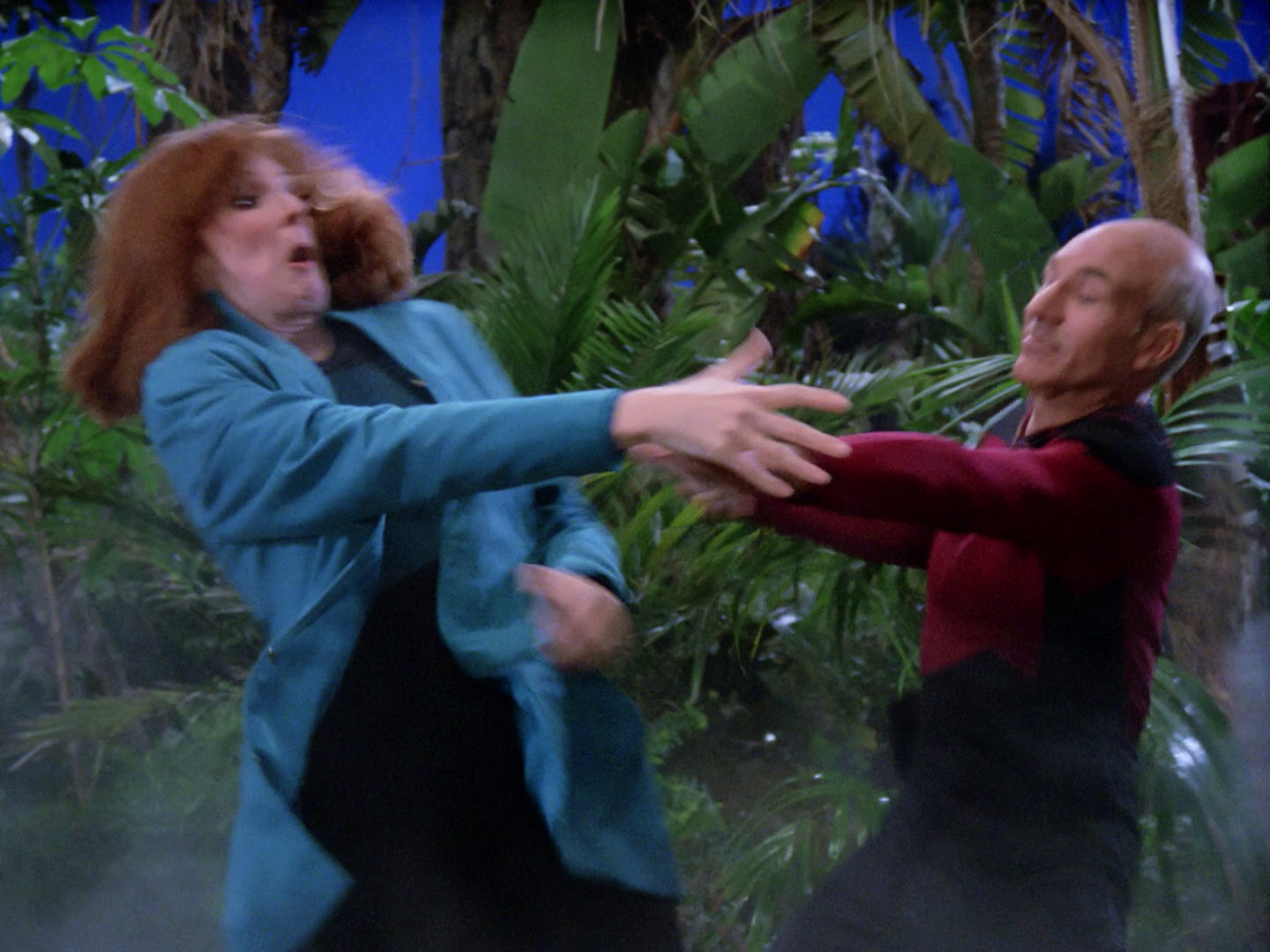 Martha: Well of course it is, and Crusher somehow manages to fall UNDER some pretty heavy sand…

Martha: We’re supposed to think it fell with her from the walls or the top I guess

Martha: But Picard, being a manly man, was not so afflicted by this sand so we get treated to Picard’s bedside manner STAY AWAKE. THATS AN ORDER

Cindee: so Crusher is covered in sand and tells Picard how to do basic first aid, which one would think he’d know…

Martha: Erm no. Basic first aid has been cured. Nobody needs it anymore

Cindee: Meanwhile, she uses her knowledge of roots from ANOTHER PLANET to identify one on this one that could be useful

Martha: ALL YELLOW PLANTS ARE FINE

Cindee: And Picard tastes it and it’s yellow so naturally…

Martha: How dare you question her Grandmother’s knowledge. So we now know Crusher once lived on some planet where I guess everyone died… except Crusher and her grandma…

Cindee: They all did, they all have some horrible tragic past.

Martha: I’m still waiting on La Forge’s. And Riker’s. And Picard’s! I cant wait to learn of their emotional turmoil

Martha: oh, guess what happens when they fall down the hole… It’s a literal RIP to the lab cardigan

Martha: I thought we agreed on lab cardigan

Cindee: You agreed on lab cardigan… its not like she can’t get another one

Martha: Im sure Troi has a massive fucking unused stash she can have ‘these are all brand new in the packet’

Cindee: What on earth are you talking about? She can just replicate a new one

Martha: They havent used the replicators yet! I dont think anyway…

Martha: If something like fizzles into view is that the replicator? cos the Klingons got themselves some food like that.

Martha: Okay the Klingons replicated food then. They knew how it worked. Maybe Worf told them after the yelling…but I’m not aware of it being made a point of yet.

Cindee: Well, the odd thing is, different aliens all seem capable of using each others technology without instruction all the time

Martha: Well, I do not know the technology. I am but a primitive alien

Cindee: What you can and cannot replicate seems to change for the convenience of the plot

Martha: Well thats fair enough haha. Anyway, I think its a good job Geordi is left in charge because Geordi is the only person who remembers the ship separates.

Martha: AND he knows that theres always time for a log!

Cindee: seriously, they almost never separate it and they almost always should! Well ya gotta have logs

Martha: Picard knows no one else will bother with a log whilst they’re being shot at by an invisible massively powerful alien and all their shields are down and most of the senior staff are stuck on a planet where they cant beam off being shot at by similar powerful things…

WELL would YOU separate if you got the reception La Forge got? I left you this ship in one piece! FIX IT FIX IT FIX IT! HOW ABOUT A WELL DONE PICARD??

Martha: How about a pat on the back? When he comes back Picard is all ‘when I left this ship was in one piece, sort it out’

Cindee: oh well he was joking!

Martha: and its his ‘hahaha’ way with Riker which has absolutely no humour to it half the time. He is rubbish at joking!

Cindee: Well he is still learning

Martha: he is getting there. if he wasn’t as aggressive the rest of the time I could take his jokes as jokes haha. Oh I forgot about Data rescuing them from the convenient hole. Oh, also, contrary to popular believe (very) white men CAN jump (down holes…)

Cindee: That’s the title of a movie, not a popular belief

Martha: I take all my beliefs from Woody Harrelson movies. Twinkies are gods gift to food, and, other stuff.

Cindee: you are now making pop culture references I do not understand

Martha In Zombieland he’s obsessed with finding a twinkie as they are the only food which can survive an apocalypse, or something…

Cindee: Also, can’t believe you didn’t complain about the lack of Wesley..

Martha: Hahah after ‘Coming of Age’ I’m due for a break….