Cindee: Are you getting out your M and Ms?

Martha: Oh I’ve eaten them all. So I assumed they were going to tackle arranged marriage with their usual sledgehammer tact, and I was not disappointed!

Cindee: Ha, so, it starts off with that creepy talking box, yes?

Martha: Oh god yes. Clearly they spent all the CGI budget on disco ship and had nothing left for the box…

Martha: The box spilled out a bunch of gems in a really awkward way, like those glitter bombs. Who’s gonna clean that up!?

Martha: Well! That explains where Wesley is, cleaning up, cos is he fuck invited to the wedding!

Cindee: You can’t invite a 15 year old to a naked wedding.

Martha: Oh it was a naked wedding? They hardly every mentioned that…

Martha: I was being sarcastic

Cindee: I fucking hate that woman

Martha: Yeah I see your annoyance, but are you as annoyed as Deanna? Do you want to punch a gong out of your way and storm off?

Cindee: I want to punch someone most days, so

Martha: I liked that her party outfit was her work outfit but glittery. But at least she HAD a party outfit!

Cindee: Yeah it is super bizarre that they wear their uniforms like all the time

Martha: Yar made her hair fancy! And so did Crusher. I thought for a second that’s who Wyatt was drawing. Oh and Yar is all ‘woooah you get married NAKED’ Trust Yar.

Cindee: Are we really going to talk about everyone’s hair? Cause then I’m out.

Martha: Only cos you like Picard, and he has no hair.

Cindee: He has a little. Also, I like Dr. Crusher and she has hair. I just don’t give a shit about it.

Martha: It’s only because I thought she fancied it up to look like Wyatt’s pictures. But it wasn’t her. It was the residents of disco ship

Cindee: Why are you calling their ship disco ship?

Martha: Cos it’s having a goddamn rave! It’s got fancy lights like a disco and everyone in it has an infectious disease. Just like a real disco.

Cindee: Alright, you win. Disco ship. The resemblance is not as uncanny as the pokeballs though.

Martha: Only cos we don’t have discoships and I have a patent pending before you try.

Cindee: Ok, so my question, how the hell are these people and Lwaxanna old friends. They seem to hate each other!

Martha: Haha! Well! You mentioned about her random accent she chose. On this her mum says she got it from her dad!!
‘Quick! Explain the accent disparity’

Cindee: Majel couldn’t do “British person badly doing American” or whatever the hell we’re gonna call Troi’s initial accent. That’s the only thing I can think to call it. I don’t think she WAS trying to do an American accent, but she sounds like a British person trying to sound American. Maybe her father was British but wished he was American

Martha: I’m sure I read the actress has some Greek parentage…

Cindee: Yeah her accent is just British though, I know because eventually the actress gets lazy and reverts back to her British accent

‘… it seems to me that she has become trapped by a custom of her home world which the facts of the twenty-fourth century have made unwise and unworkable. I wish I could intervene.’

Cindee: Oh Picard. Cultural relativity is not really their thing early on, is it

Martha: Hahaha well maybe they felt that they’d covered racism and sexism, so now it was religion’s turn!

Cindee: I never got the sense that it was a religious thing

Martha: I guess thats just what I associate with arranged marriage

Cindee: Riker talks about ‘habits of the beasts’ which I don’t want to know about and appears to have used the holodeck purely to create a rock to lean on. My google image searches have made me very aware of the Riker lean and he really gets into the Riker lean this episode. There’s at least 3 ponderous exaggerated leans. 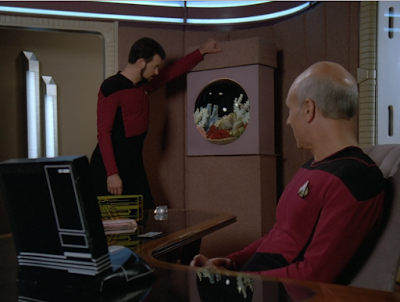 Cindee: You mean his thinking face?

Martha: So Troi flounces out, punches a gong, and goes out to have a chat with leaning Riker. In that time, they stop fighting in the hall, come to a detailed compromise about the wedding traditions, AND Wyatt even says he’s saw his dad practising NAKED in the mirror. Just how long was she gone?!

Cindee: You don’t practice being naked? I mean, it takes practice

Martha: Honestly I think I need practice haha. ALSO Why does Lwaxana have a sentient fake plant. And why doesn’t her best friend know about them if they’re a betazoid ‘pet’
Targ > plastic plant 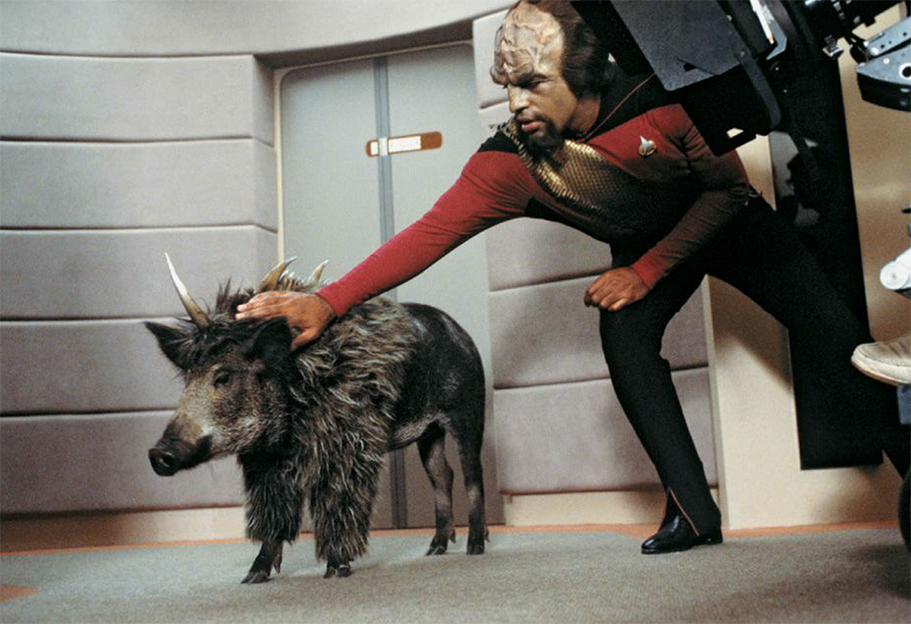 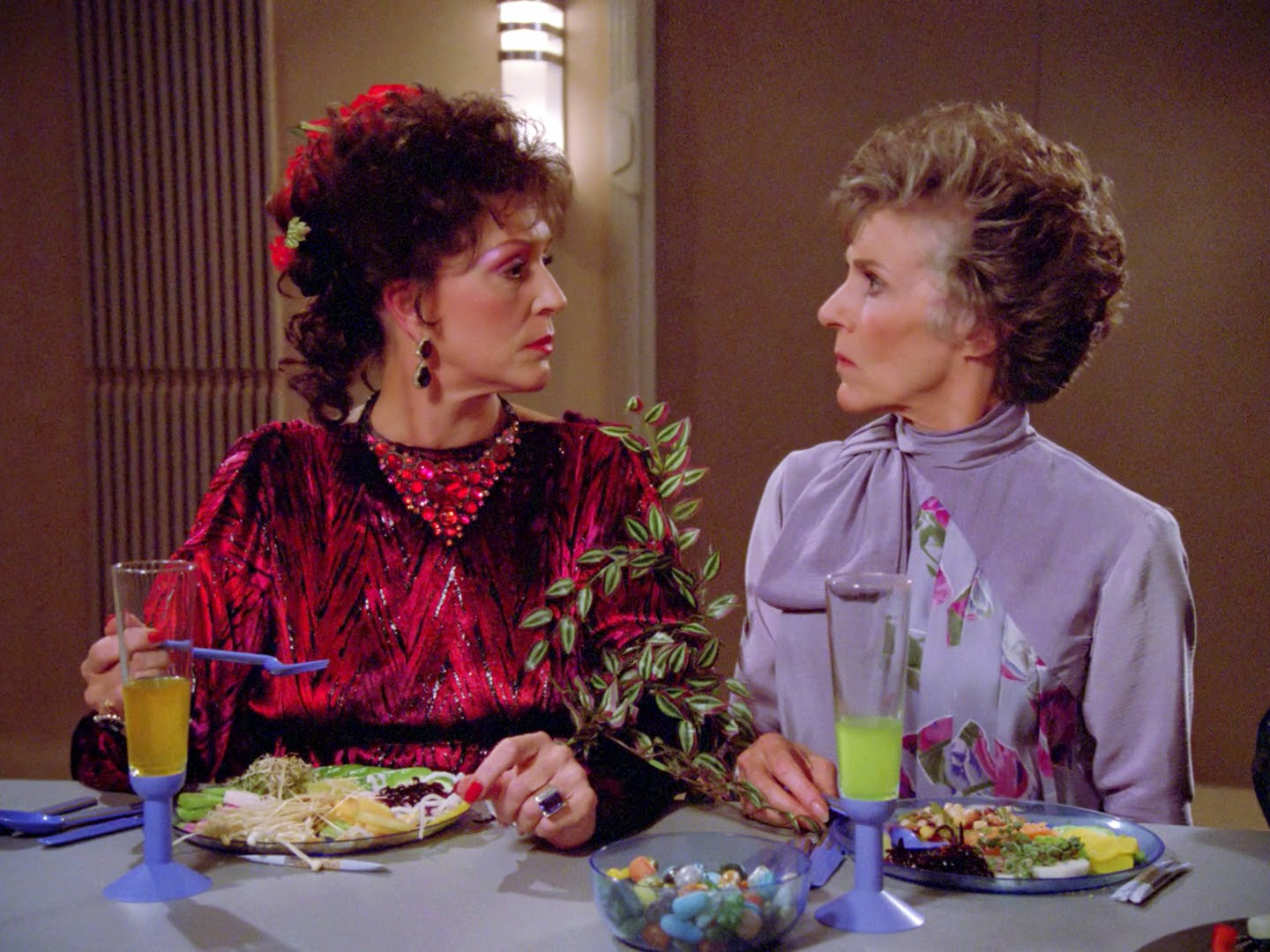 Cindee: What does the word “sentient” mean to you

Martha: The dictionary says ability to feel or perceive. Are you saying plants don’t have feelings…

Cindee: So then it’s not a plant…

Martha: Okay. Why does Lwaxana have a fake plastic plant that the Star Trek producers are telling me is an animal

Cindee: Lmao, to bother the other lady obvs!

Martha: Clearly haha. Picard is getting so much better. I enjoyed him weakly taking the bag away. I enjoyed him telling Data he was circling the room like a buzzard. I LAUGHED at ‘I was not amused’ at Lwaxanas ‘joke’!

Cindee: Picard can be a funny dude

Martha: He had some top class banter today.

Cindee: ok, so, what are your thoughts on the idea that these two lovebirds have been dreaming of each other all their lives?

Martha: Like firstly, if I walk into someone’s house/disco ship, and there are drawings of me AS A CHILD all over the wall, I take my two items of medical paraphernalia. And I leave.

Cindee: well, he was drawing her all the time, too, so . . . . also, as established, he couldn’t leave once there

Martha: Drawings which he subtly put out to show his ‘fiancée’ HERE IS MY DREAM WOMAN WHO ISNT YOOOOOOOU

Cindee: Well he thought it was going to be her, so maybe he was like “I’ll creep her out by showing her a picture I drew of her”

Martha: not when he displayed them in his room Cindee! He knew it wasn’t her! He’d already met her!

Cindee: Oh, ok. well, I like to draw men I wish my husband was and put them around the house, too. Don’t we all?

Cindee: Wasn’t he supposed to just beam the supplies, not himself?

Martha: Oh that would make sense

Cindee: Why Crusher would have him do it when she has plenty of minions, no one knows.

Martha: Lwaxana takes this weirdly well. As does everyone?! They even let Deana keep the jewels!

Cindee: I always figured everyone was secretly relieved. Ok, so a couple more random thoughts. How weird is it that they all figured out where Troi’s ship would be and agreed to all show up there at the same time, unannounced. I guess the creepy box did announce it, but barely before their arrival

Martha: Also Troi is clearly upset and Picard is all ‘congrats! Let’s all go to the wedding!’

Cindee: Well he’s not an empath. I mean he can’t just sense people’s feelings like Troi!

Martha: He has ZERO empathy if that’s what you mean

Martha: I guess I assumed a fancy word for sex

Cindee: no, they were genetically bonded from childhood.

Cindee: Also, why is it a foregone conclusion that she’ll leave the ship

Cindee: She chastises Troi for talking out loud, how the fuck does she think she’ll communicate with her new husband?

Martha: Hahaha well if she just CONCENTRATED she could sense his thoughts, like she can with sexxxxxy Riker!

Cinden: Theyre imzadi, Martha. Also I think they had to think their thoughts at each other to hear them

Martha: I don’t get their relationship. They’ve barely said a word to each other and now he’s all sulky

Cindee: They had one before, before the show

Martha: And he left her. To be a ship captain? Are there Star fleet rules about relationships and ship captaincy? I mean they apparently have a ‘no fighting at parties’ rule

Cindee: You know it’s never 100% explained, but yeah the idea is that he put his career first, but captains can get married. OK, spoilers, but I think Riker and Troi met on Betazed and then he got reassigned or something and she couldn’t go with him or whatever.

Martha: But now they’re together ALL THE TIME

Cindee: Have you never watched a TV show or something? They’ve gotta will they or won’t they. That’s how romance works on TV

Martha: Do they even still talk to each other outside of work?

Martha: You don’t know that!

Cindee: Yes I do, I’ve seen them do it

Martha: I want to see some downtime bridge crew.

Martha: Do they have a B team so they can have a rest

Martha: But we only care about Picard’s shift

Martha: Oh no Worf this episode! It doesn’t make sense for him not to be at the wedding! Maybe Klingons can’t go to weddings

Cindee: Yeah me too, people should keep their fucking clothes on. 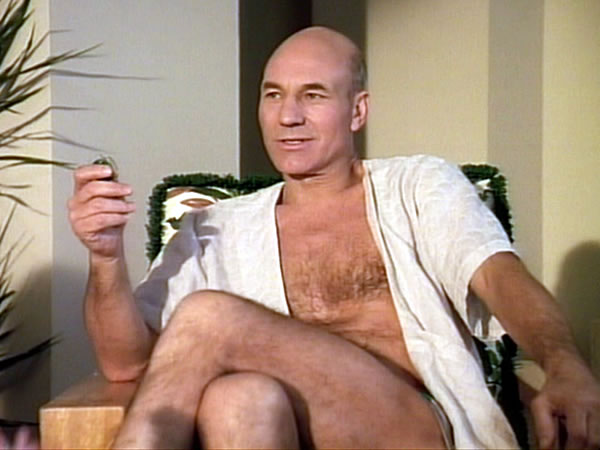