Martha had the strange idea to watch The Battle and chat with Cindee at the same time. The result was that everything is out of context and makes no sense. So, Cindee copied and pasted information from Memory Alpha so you know what is going on.

Cindee: *waits for it*

Cindee: yup, there it is

Dr. Crusher comes to see Picard in his quarters, where he complains of feeling fatigued and having a bad headache. She examines him and can find nothing wrong, but tells him to come to sickbay all the same.

Martha: Crusher has solved headaches. And is surprised that Picard has one.

Cindee: Yeah that seems very funny to me. Like, what is solving them exactly? A headache vaccine? Like maybe they have better painkillers, I’d buy that. But headaches just don’t happen?

Picard returns to the bridge and talks with the Ferengi captain, DaiMon Bok over the Enterprise’s viewscreen.

Cindee: I told you, that first episode is wildly inconsistent

Martha: You spelt SEASON wrong. This Ferengi seems a little nicer than the others. And a bit more chill.

Cindee: Or so he would have you believe

Cindee: spoilers? the title of the episode is “the battle.” WTF do you think is going to happen.

Martha: Wesley battles to have someone listen to him?

Picard goes to sickbay where Crusher examines him again, but fails to find any medical reason for his headaches.

Martha: AS SIMPLE AS A HEADACHE. Crusher is having none of it. Oh the days before they knew the NATURE OF PAIN.

Cindee: Well they’ve mapped the brain now. Once you map something, it can’t hurt anymore

Picard returns to the bridge, where Wesley Crusher arrives and tells Geordi La Forge that when he was boosting the range of the long-range sensors, he detected a ship approaching.

Cindee: You need to buy these: 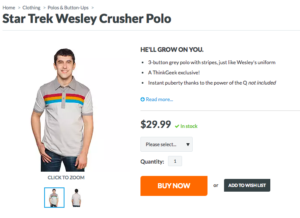 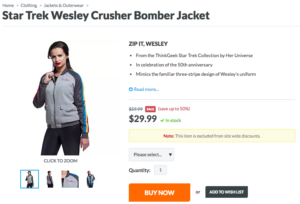 Martha: But why of all his fabulous jumpers is this the one that’s taken off? Is this his uniform now?

Cindee: I’m so sorry to be the one to break it to you, but, the sweaters are done for. UNPAUSE.

Picard is then hit by another headache, before ordering La Forge to zoom in on the approaching starship. It is the Stargazer, which the Ferengi found adrift, and are now giving to Picard. Bok says it will be a gift, free of charge, which his subordinates don’t like.

Martha: oh no, the headaches back. TROI CANNOT BELIEVE IT.

Cindee: Well of course not!

Martha: This headache is very distracting to poor Picard.

Cindee: Well, if you’d never had one before and got one, wouldn’t you think you were dying or something?

Martha: Oh god Troi felt the headache. A GUILT HEADACHE. NOT A THING. Hmmmm, this seems too good to be true.

Cindee: Them giving them the Stargazer?

Martha: Yes. even his mates don’t buy it…

Cindee: What are you talking about? It makes total sense to find a derelict starship that was responsible for the destruction of someone of your people’s ship and then give it back to the owners

Later in the observation lounge, Picard tells the crew about the battle. He then performed what is now known as the Picard Maneuver: he ordered a jump to high warp, making it appear to the Ferengi for a second that the Stargazer was in two places at once.

Martha: Okay Riker seems happier talking about the Picard Manoeuvre than he did on the sexy planet

Cindee: Picard is his hero. Side note, is that a typo or is that really how you spell maneuver?

Martha: Yes that’s how we spell it. IT’S FRENCH. AS FRENCH AS PICARD

Martha: How dare you. HE IZ ZE MOST FRENCH!

Cindee: With his British accent. Anyways, they’re on the Stargazer now?

Martha: They are. Picard left nudey mags in his cabin.

Cindee: How dare you

Martha: And a glowy Pokeball. Oh its a headache bomb. 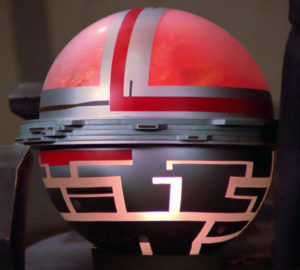 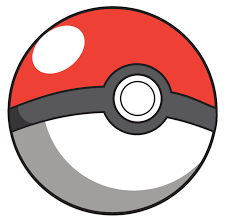 Cindee: I was wondering what you’d call that thing

The return to the ship and sometime later Data shows Riker a personal log that Picard supposedly recorded, claiming that he attacked the Ferengi vessel without provocation and that the Ferengi ship was under a flag of truce.

Martha: Picard LIED?? Or they’ve messed with the records.

Cindee: but which is it?

Martha: This Pokeball is really messing with poor Picard

Cindee: Ok, so what exactly is a Pokeball?

Martha: You catch Pokemon in it. They shrink the Pokemon down and it lives in there

Cindee: So maybe it is the headache Pokemon in that one

Cindee: What is a Psyduck?

Cindee: Is that the headache Pokemon?

Martha: A Pokemon, and it gives itself headaches with its psychic power

Cindee: Alright then, so that’s what’s going on

Picard is in his quarters when Crusher arrives. He tells her the headache is worsening, and he is worrying about the battle and whether he did the right thing. Crusher gives him a sedative and puts him to bed.

Cindee: well she needs to monitor his brain or something

Martha: Why has no one asked Wesley how to fix this headache?

In Picard’s ready room, Data is informing Riker that the log is a forgery

Martha: Riker is so rude!

Martha: Data tells him that some ‘checksom’ things don’t match in the logs, so Riker asks him what that means, he started to explain and Riker says, I DONT WANT A COMPUTER SCIENCE LESSON.

In sickbay, Dr. Crusher is discussing the headaches with Deanna Troi when Wesley enters. He tells her that he noticed the captain’s brain patterns were exactly the same as low intensity transmissions detected coming from the Ferengi ship.

Martha: Fuck off Wesley (says everyone!) From a quick glance I have solved all this.

Martha: Dr Crusher is off to take all the credit. Oh Picard’s bloody beamed off the ship again.

Cindee: At least he didn’t beam into a cloud this time. Ok, so did the Daimon explain shit yet?

Cindee: Yes. Kirk was indirectly responsible for the death of Khan’s wife.

Cindee: Well obviously this is not a rip-off of that one, as it didn’t exist yet

Riker realizes that he is going to use the Picard Maneuver, so he orders Data to come up with a suitable defense.

Martha: There is no defense against the Picard Manoeuvre

Cindee: Riker: “think of one anyways” Data: “oh ok, sure”

Kazago hails, and tells Riker that Bok has been removed from command for his part in this “unprofitable venture”.

Martha: Engaging in an unprofitable adventure

Cindee: I told you, Republicans. What I don’t get is, why do the Ferengi forbid the Pokeballs? They seem like they’d be pretty profitable.

Martha: Okay so that’s a win for Wesley. Oh and they gave up on inertia. Who didn’t listen in tractor beam conservation lecture after all!

Cindee: Also, they are towing that thing as sunlight speed. So its gonna take them centuries to get anywhere with it.

Martha: It’s so worth it though, for the nudey mags.

Cindee: I will not sit idly by while you insult Picard like that! 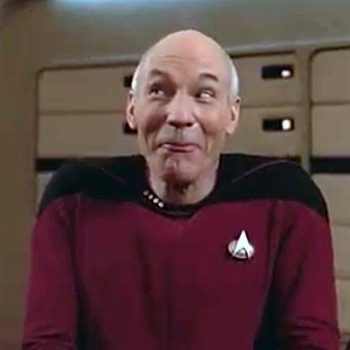